“Breathing is the brain’s highest priority to protect the survival of the human organism.  The human body can withstand long periods without food and water but only minutes without oxygen.”

Obstructive sleep apnea (OSA) is a serious, potentially life threatening sleep disorder. It owes its name to the Greek word ‘ apnea’ meaning ‘want of breath’. Patients with OSA have an increased risk of heart attack, stroke and high blood pressure and often display excessive daytime sleepiness that can result in serious accidents.
OSA is usually defined by interruptions in airflow of at least 10 sec (apnea) or by a decrease in airflow of at least 10 sec (hypopnea) associated with either an arousal (the brain briefly arouses people in order for them to resume breathing) or a blood oxygen desaturation.

We’ve become a society in which sleep is considered the one commodity that can be sacrificed to accomplish other task but without a restful sleep, the body is in a constant state of fight or flight.  It’s under stress. Going night after night without sleep wreaks havoc on the cardiovascular system.  Sleep apnea appliance also has been linked to obesity and diabetes.
Patients with OSA can die.
In our dental office, we treat obstructive sleep apnea with oral appliances.  Namely, the Narval, Somnodent or the SUAD appliance.

Does not limit sleep positions
Does not need extra baggage when travelling
Do  not need to disconnect tubes to get out of bed or to take a sip of water or medication
Does not make noise
High compliance rate
No Electricity
No Wires
No Hoses
No Mask
Disinfection and care: Simply, Quick and Easy
Makes travel easier – Appliance fits into palm of hand

Bite changes are the most common drawback.
Bite issues exist briefly – typically in the first half hour after the device is removed.

No treatment is NOT an option!  Obstructive sleep apnea is a serious medical condition and small, temporary sacrifices can be made to allow the appliance to work. 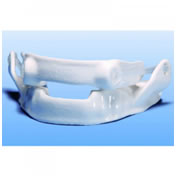 Over the counter (OTC) treatment options:

A severe risk of using internet or OTC snoring device to treat sleep apnea is that the device might silence a noisy apneic, perhaps forever! Oral appliances that are not custom-made and do not fit well can become dislodged during the night and choke the wearer.

Our mandate is to work as a team with other practitioners, physicians, ENT’s, pulmonologist and sleep centers – in the best possible way in the best interest of the patient. Sometimes a combination of oral appliance therapy and CPAP is the best option for a severe apneic patient. The oral appliance allows for lower air pressure on the CPAP thereby reducing the annoying effects of excessive drying of the eyes, nose etc. and the noise of the CPAP machine for your bed partner.

I have struggled with loud snoring and sleep apnea for a number of years. Tried a CPAP machine and wasn’t able to fitted with a mask that did not leak. I was then advised to try the Somnomed. Immediately the snoring stopped. I haven’t missed a night wearing it and find I am not as tired in the morning. I am highly satisfied and would recommend anyone to try it! Thank you to Dr. Mehan and staff.

For many years I have felt exhausted! My doctor suggested a sleep study and the results showed I didn’t need a CPAP but an oral appliance would really help me. I contacted Dr. Mehan’s office and am so glad I did. The RESMED device works amazing. It is easy to wear and keep clean. I sleep so much sounder at nights and wake up much more refreshed. I am not as weary during the daytime. If I don’t wear it I sure notice a difference now. Thanks for assisting me in getting a better night’s rest leading to a more productive day. Awesome!

I use the Somnodent sleep appliance. For years I did not sleep regularly or through the night, not knowing that I had sleep apnea. After having a sleep test and seeing a sleep doctor, I chose to try a dental appliance instead of a sleep machine. The results have been FANTASTIC. My wife never was able to sleep through the night due to my snoring. Since using the Somnodent, she has lost no sleep as I do not snore anymore. I sleep through the night and am no longer tired through the day. My health is better and my energy has increased. Device can be taken anywhere, is easy to use. Dr. Mehan has been great throughout the process. I have suggested it to friends and would recommend it to everyone.

1 hour consultation is the first step required For sleep apnea complications. a $140 fee applies, but credited back should you move forward with oral appliance therapy